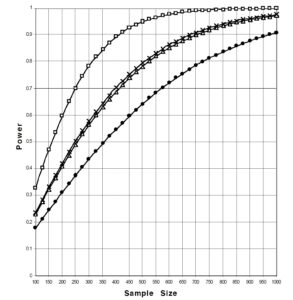 There are a number of reasons why it is more complex to compute power for an SEM. First, we must clearly articulate for precisely what effect we want to estimate power. In any SEM, there are many types of effects in which we might be interested, some of which might have different effect sizes within the very same model. For example, we might want to compute the power to detect a single parameter (say a treatment effect); or we might instead be interested in the power of a single mediated effect, or several mediated effects; or we might be interested in the power to reject the entire model as a whole. Even once the effects of interest are clearly identified and the associated effect sizes are determined, there are three general approaches to estimating power from which to choose.

The first is based on the methods originally proposed by Satorra and Saris (1985). For this approach, a chi-square difference test is used to determine the power of detecting the omission of one or more specific parameters (although it can be applied to other types of model restrictions as well, such as equality constraints). It is based on the non-centrality parameter which is an estimate of the difference between the central chi-square distribution (that holds when the model is correct) and the non-central chi-square distribution (that holds when the model is incorrect). This method works very well, although one challenge is that all parameters that define the model must be assigned specific numerical values. Further, tests are limited to evaluating constraints (e.g., omitted parameters, equated parameters) and it is difficult to estimate power for effects such as mediated pathways. Finally, the validity of the test rests on the meeting of all underlying assumptions (e.g., sufficient sample size, multivariate normality, linearity, and complete data).

A closely related alternative method for power estimation is based on a Monte Carlo simulation approach (e.g., Muthén & Muthén, 2002). Whereas the chi-square difference test is derived analytically (that is, based on areas under the central and non-central chi-square distribution), the Monte Carlo approach builds an empirical sampling distribution of a given effect based on multiple draws from a simulated distribution. Like the Satorra-Saris approach, the Monte Carlo method also requires that all model parameters be assigned specific numerical values. However, a distinct advantage of this method is that it does not rely on asymptotic assumptions. As such, power can be estimated under conditions such as small sample size, non-normal distributions, or missing data. Further, power can easily be estimated for hypothesized effects that do not necessarily involve restrictions placed on parameters (e.g., indirect effects in mediation models).

In sum, although it can be quite important to consider issues of power when planning a study that uses SEM, it can also be challenging to compute estimates that accurately reflect how the model will be estimated in practice. There are pros and cons to all three of these methods, and these approaches share more similarities than differences. An excellent recent review is presented by Lee and MacCallum (2012).