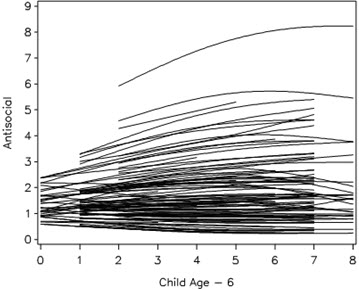 This very common question reflects a great deal of unnecessary confusion about how to select a specific analytic approach for modeling longitudinal data. The general term “growth modeling” refers to a variety of statistical methods that allow for the estimation of inter-individual (or between-person) differences in intra-individual (or within-person) change. Often, the function describing within-person change is referred to as a “growth curve” or “trajectory” and can produce different patterns from person to person: trajectories might be flat (not changing over time) or they might be systematically increasing or decreasing in some linear or non-linear form over time. These trajectories might be the primary focus of analysis or they might represent just part of a more complex longitudinal model. Regardless of purpose, there are two general approaches most often used to fit growth models to sample data.

The first approach is to fit a growth model within the multilevel modeling (MLM) framework (a.k.a., a mixed effects model or hierarchical linear model). The MLM was originally developed to allow for the analysis of clustered data (i.e., individuals within groups), such as children nested within classrooms or patients nested within physicians. However, the MLM can equivalently be applied to multiple repeated measures nested within each individual, and this allows for the direct estimation of a variety of powerful and flexible growth models. The second approach is to fit a growth model within the structural equation modeling (SEM) framework, in which case it is known as a latent curve model. The latent curve model incorporates the observed repeated measures as multiple indicators of one or more latent growth factors that characterize the unobserved trajectories. In many situations commonly encountered in practice, the MLM and SEM approaches to growth modeling are numerically identical; this includes a variety of linear and non-linear models as well as conditional models that include both time-invariant and time-varying covariates. However, in other research applications there are important differences between the MLM and SEM.

For example, whereas the MLM naturally expands to estimate higher levels of nesting (e.g., repeated measures nested within child nested within classroom) and easily handles large numbers of repeated assessments, the SEM approach is currently more limited in this regard. In contrast, the SEM is well very suited to formal tests of mediation and to estimate complex multivariate models of change whereas the MLM is currently more limited with respect to these types of models. However, the similarities between the MLM and SEM approaches to growth modeling often outweigh the differences and the optimal approach should be selected as a function of the particular research application at hand. We discuss this topic further on our YouTube channel (see videos in our Growth Modeling playlist) and several related papers are cited below.