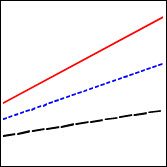 Often the most interesting research question is not whether a relationship between two variables exists but rather under what conditions the relationship holds. Put in statistical terms, we are often less interested in main effects than we are in interactions or moderation. An interaction implies that the magnitude of the relation between two variables differs as a function of some third variable. For example, there might be a positive relation between anxiety and alcohol use in adolescents, and this is particularly salient for girls compared to boys. When an interaction exists, we must probe and plot the conditional relations to fully understand the nature of the effect. To help with this, we have collaborated with Kris Preacher (who is an Associate Professor of Psychology at Vanderbilt University) to develop a set of online utilities to help probe interactions for multiple regression, multilevel models, and latent curve models. These utilities are freely accessible and are extremely helpful in understanding a variety of interaction effects that might be encountered in practice.